After a late summer of seemingly endless blue skies, South Head received an unseasonal 124 mls of rain between 08 and 14 March. On the first soggy day we were grateful as the water tank was getting low, but by the end of the second day the novelty had worn off. The rain followed by sun has turned the vegetable garden into a jungle through which I can barely navigate.

A carpet of green

In early November, we planted three rows of kūmara tupu. ‘Tupu’ are the rooted shoots that grow on a kūmara tuber. The vines are very vigorous  and are spreading all over the garden. I’m very excited about this. We’ve had mixed success with potatoes and I’d much prefer to grow kūmara if possible. We’ll have to wait until the leaves start to die down before seeing what’s hidden in the soil. This could be any time from the end of March onward and looking at our plants I suspect it’ll be more like April.

After harvest (assuming there is actually something growing underneath all those leaves) we’ll set the best aside to start a new crop next October.

Our one surviving rhubarb plant is gigantic. The stalks are fat and juicy and despite baking them into Rhubarb Tarte Tartin and adding them to cereals and desserts, many will go to waste. We also have more than we can eat of basil and silver beet, and I’m curious to see how the okra turns out. Growing okra is another ‘first’ for me, and in my ignorance, I allowed some pods to grow too long, so have cut them all off and am hoping that more will be produced before it gets cooler.

Continuing with the green theme, it looks like we’ll beat our record for limes as both trees are very well-endowed this year and also have a decent crop of new flowers. My favourite chile pepper, Habanero, is looking very fine, with each of the plants laden with flowers and young fruit. I also sowed a handful of seeds for a different squash, ‘Big Chief Butternut’, which apparently grows to 2 – 3 kg. And it is HUGE. And the capsicum (bell pepper) plants have become so large that we’ve had to support them with sturdy wooden stakes.

This summer we’ve had the heaviest crop of both zucchinis and tomatoes since living at South Head, with green beans, coming a close third.

Scattered around the vegetable garden are self-sown Cleome. I planted a half dozen a few years back to attract green vegetable bugs and the Tomato Fruitworm, Helicoverpa armigera ssp. conferta. The Cleome attract both insects really well, but there haven’t been so many green vegetable bugs this year, and I’ve been picking off the damaged tomatoes when I come across them. The hens like drawing the fat green caterpillars out. I must admit that when I overlook one, and the tomato goes rotten from the inside, I can’t bear to look at them, let alone touch them. All that ‘goopy’ decay turns my stomach.

I’ve been freezing tomatoes in 400 gram packs for use over winter; the neat thing about outside-grown tomatoes is that they are easy to peel, which saves time later. And I’ve also bottled a batch of tomato sauce. I’ve used the zucchini for pickles and we’re eating them every other day. My favourite recipe is to slice them thickly before sautéing them with mashed garlic in a little olive oil. At the last moment, to throw in a few sage leaves. Because the Costasta romanesco variety of zucchini isn’t at all watery, the sage leaves quickly go crispy and add a delicious flavour.

There are some vegetables I haven’t really bothered with… lettuces, for example. We rarely get around to eating them and while I do have a row growing and gradually aging right now, there are several earlier plants that I’ve let go to seed; the fuzzy down drifts around the garden with the slightest breeze. Lettuces are unlikely to become a problem if they sprout everywhere… I allowed a golden turnip plant to go to seed in Spring and we now have them growing in a couple of the pathways. There are only single rows of beetroot, carrots, parsnips, golden turnip and rocket – not that you’d ever need any more than one row of rocket! 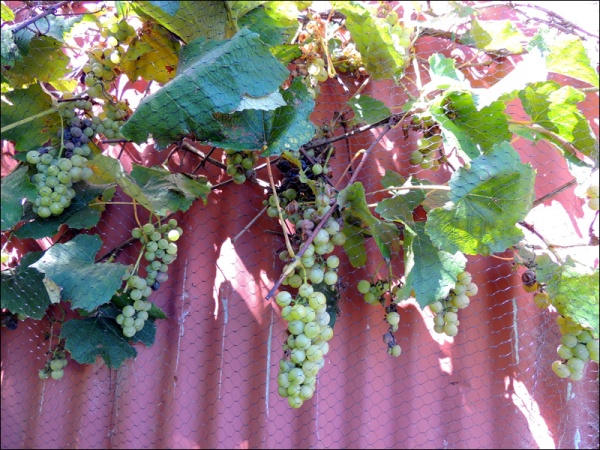 Yet another amazingly productive crop we’ve had this season is grapes. The vine stretches along the sun-drenched,  north-facing wall of the barn and I’ve never seen as many. We can’t keep up with eating them, so they are all beginning to split and ferment on the vine.

Grapes are particularly attractive to honey bees – more so in the morning, and in the evenings I’ve seen the German wasp, Vespula germanica hovering around, so I’m hoping to observe them at dusk at the end of one of the fine Autumn days we have ahead of us, to see if we can ascertain the location of their nest.

In about a week’s time I’m heading to Asahikawa in the north of Hokkaido for about five weeks. The contrast in weather will be a shock, I’m sure – going from the mid 20s to low 30s Celsius to close to 0 degrees (at least, for the first week or so), but I’m very much looking forward to my very first visit to Japan and am planning on writing  about my impressions while I’m there. Because I won’t have the distraction of the garden, I should have much more time to write, which will be something I’m really looking forward to.