All is quiet when the mist seeps in
to hold the land close in its selfish embrace.

The twiggy branches of the gingko are decked
with the clever webs of orb-web spiders.
They shimmer in the slightest breeze.

The bright green grass glistens with dew
and my steps form wet hollows.

In the orchard, a tahou hops and flits
on lichen-encrusted bough.
His breakfast a selection of tiny insects.

It was foggy when I awoke this morning, and a rather chilly 7 degrees Celsius.

The paddock next door glowed a mellow brown against the leaden sky. It had been freshly-plowed a couple of days ago and the rich earth bristling with broken maize stalks reminded me of a rough slice of dark rye bread.

I walked a circuit of the property several times (my usual practice). This combines exercise with the chance to see the myriad changes in the garden from the previous day.

What captured my attention today was the texture of the light through the mist and the way it picked out the delicacy of the tiny things it touched.

For example, I saw  the work of countless orb-web spiders.  Their intricate webs are strung from fence wires, dangling from branches and woven between the leaves of the harakeke and other native shrubs.

This morning, each web was heavily laden with tiny drops of water.

The Colours of a Misty Day

At first glance, the garden appeared to be clothed in muted greys and pastels.

Paradoxically, as I drew close to them, trees and shrubs seemed somehow fresher.  They appeared to loom up out of the grey and stood out with greater clarity than I’d noticed on days where there is no mist.

All the while, the sun was trying to break through the moisture-laden air.

A tiny Tahou fed on small insects on the lichened branch of the old plum tree.

I was interested to read in Lynette Moon’s Know Your New Zealand Birds that this pretty little bird is protected.

Waxeyes are classified as native, which means they are either naturally found here, or self-introduced; large numbers migrated to New Zealand from Australia in the 1850s.

Who is the specimen here? 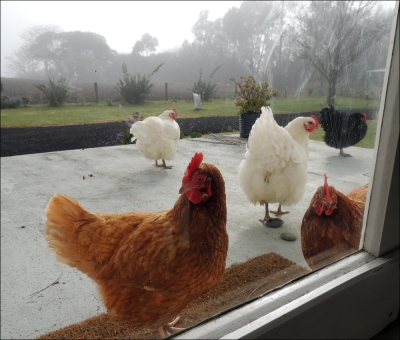 When I came back indoors, several of the hens were on the terrace, looking in at me through the living room window. Sometimes I have the distinct impression that I’m a specimen in a zoo.

Molly joined me. She looked at the hens, the hens looked back. Then they walked away. Slowly.

This always amuses me. Had she stared them down? What is the pecking order here?

On rainy days when the hens are sheltering near the window, Molly often looks out at them. Sometimes she goes right up to the window and just looks. I’d like to be able to read her mind.

Curious, I look out the wash-house window to the west and see a crescent moon, low in the sky. It is deeply golden.

(Alas my photo does not show this well
but I promise you it was golden.)

And this crescent moon is lying supine, lightly resting on the very tops of the pines in Redhill Forest.

A mischievous wind blows hair across my face as I walk to the fence, intent on resting my Nikon on a post to steady my shaky hands.

The long grass paints my ankles with wet stripes and the cool breeze is particularly interested in the end of my nose.

Overhead The Milky Way is too much for me tonight. The single moon-shape is what draws me, reclining there just above the horizon.

My app tells me it’s a waxing crescent moon and the wind is 13 kph SSE.

I could have sworn it was a Northwesterly.

The nuts are starting to drop from our macadamia trees.  I’ve collected over 100 in the past week, with more falling when it’s been breezy overnight.  Even our smallest tree is producing a few this year.  We still have a decent amount of nuts from 2012, which we’ll have to get through.  It just takes time to crack them but it’s something that can be done in the evening while watching TV.  Once they are shelled, I’ll be toasting them and then grinding them; mixed with a little sugar and coconut oil, they make a really yummy gluten-free, vegan crust for a dessert pie.

I’ve finally managed to identify a weed we have on our property.  Helminthotheca ecioides, or Bristly Ox-tongue.  It was apparently naturalised in NZ in 1869.  It’s a horrible weed as it grows up with nasty hairy spikes on its stalk and leaves, and these can really hurt if you try to pull one out with bare hands.  We’ve mostly eradicated these from our property, but they still come up here and there.  This is one ugly weed.

Strangely, Lottie came back last Friday.  It was a rainy, squally day and I hadn’t been outside much, but when we checked the hen house after dark before closing the gate of their enclosure for the night, Lottie was sitting on the very top perch (having evicted Lulu and Leila) as if she had never been away. The poor Orpingtons had had to vacate the bottom perch and were sleeping together on the floor.  We were away overnight Saturday / Sunday and weren’t sure what we’d find when we came back on Sunday afternoon – I was very curious to see if Lottie was still at home, and if she was, what shape she was in.

When we arrived, Lottie, the two White Orpingtons (Francesca and Pearl), and one of the Black Orpingtons (Fatima) were nowhere to be seen.  Lulu, Leila and Hannah (the youngest Black Orpington) were pecking around the property in their usual fashion.  We called and called, at first to no avail.  Then the four wanderers appeared, casually walking back from across the road.  My heart sank at the thought that Lottie might start luring the other hens away during the day.  That night when we shut them into their enclosure, we wondered what would happen the following day.

As it turned out, as soon as I let them out on the Monday morning, Lottie strutted off at great speed, across the grass, past the garage, down the driveway and across the road.  She hadn’t even had the decency to lay an egg before leaving!  Fortunately the other hens didn’t notice her departure, so not one followed her.  She didn’t return on Monday evening, but to be honest, I wasn’t worried as my thoughts were that she was likely to cause more problems if she did come back permanently.

Then surprisingly, later on this afternoon, who should we see but Lottie making her way back home across the road.  Tonight she has been shut in a separate area of our enclosure, and I won’t be letting her out tomorrow.  We’re going to see if she copes with being kept shut in for a few days… it will be interesting to see if she lays an egg while she’s here.  When we checked her tonight, she was sleeping on the top perch of her house – all alone (of course).  At least she won’t be pecking and bossing the other hens around, and nor will she be leading them astray (tomorrow, at least).

We are still eating feijoas (although surely they will have all finished ripening, soon) and are starting on tamarillos.  There is a farm up the road that sells bags of the latter for $2.  These are so much nicer than any I have ever purchased from a store, and our own orange variety, ‘Tamarillo Bold Gold’ is also producing fruit for the first time.   The fruit is smaller than the reds, but very juicy and sweet.

The bananas look like they are starting to ripen.  They are certainly getting fatter and the top rows are definitely turning a lighter colour.  As these are the first bananas I’ve ever grown, I have no idea what to expect as far as time to maturity is concerned.

Our two young lime trees are a mass of flowers and small fruit.  Typically, a strong wind started blowing in today from the North West.  I’m hoping that it doesn’t inflict too much damage on the new growth.  The lemon trees also look to be producing buds, but not as energetically as the limes.

It’s been wet off and on for over a week now.  We do get a degree of sunshine during most days, but then the clouds build up and it’s gloomy again.  I think this June our solar generation will be the lowest ever.  Thank goodness it’s not long until the shortest day.

In the vegetable garden, broad beans have come up, as has curly kale.  The Egyptian Walking Onions are looking good, as are our mixed lettuces, beetroot, rocket and radishes.

I don’t know why I grow radishes – probably because the variety I have sown, ‘Easter Egg’, is so pretty when they are small – white, pink, purple and red – but I tend not to eat them myself as they are too peppery for me.  And this from someone whose favourite chili is the Habanero. 🙂

Speaking of which, I am still picking habaneros, and our basil still hasn’t died off, although it’s getting a little straggly as I have omitted to keep up with removing the flower spikes.  I have had absolutely no luck with parsnip seeds this season – nor with leeks.  I’ve sown a couple of rows of each of these, but none have germinated.  Very annoying.