Asahikawa is a sprawling city, first settled by mainland Japanese in 1889. The name ‘Asahikawa’ can be directly translated to mean ‘Sun (or ‘Morning Sun) River’. It lies along the Ishikari River (Ishigari-gawa) in the agriculturally important Kamikawa Basin. The river’s name is derived from an Ainu term, ishikaribetsu, meaning ‘greatly meandering river’, which describes the flow of its lower course. To the east of Asahikawa is the Daisetsuzan National Park  and very close by are ski fields (comprising the ‘Hokkaido Powder Belt‘). It also has a well-known zoo. I’m staying at a central location, close to Tokiwa Koen.

I’ve walked through Takiwa Koen a couple of times already. The park is still mostly blanketed with snow, and while many of the paths are exposed, you still have to negotiate around slick, icy patches and there are whole areas that are completely obscured. With daily temperatures ranging from 3 to 7 C this week, it won’t be long until all the snow has melted.

The park is home to many crows. There are two species here – the Carrion, Corvus Corone, and the Large Billed, Corvus macrorhynchos. The Large Billed look especially comical and somehow ‘human’, with their fat beaks and high ‘foreheads’ – the beaks remind me of lips that have been treated with botox. There’s also a pair of mallards that I’ve seen paddling on areas of the lake with moving water, and there are other birds that I can hear chirping up high in the bare branches, but have so far have been unable to capture with my camera.

One thing I noticed yesterday was the emergence of the park benches.  A couple of days ago they were nowhere to be seen, well-camoflagued under drifts of snow. Now they’re appearing here and there, decked with large and irregularly shaped white lumps.

On Wednesday I walked through the park late in the afternoon, then headed across the Asahibashi; the large green bridge that spans the Ishikari river. I was curious about a structure on the northern bank, which reminded me of something more typical of Eastern Europe, than Northern Japan. It’s called ‘Bell Classic‘ and is a venue for weddings and so forth.

When I arrived a week ago, there were many things that were strange or unexpected, standing out ahead of the more subtle differences. In any new environment, ‘first impressions’ quickly become commonplace and I can feel this happening already, so I’ve decided to focus on one of these ‘differences’ each time I write, (or at least until I run out of ideas!). 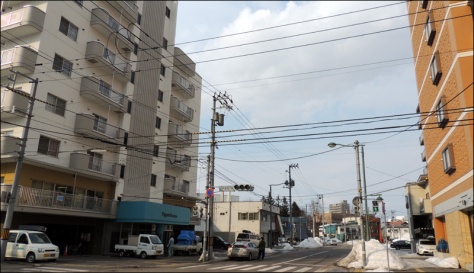 Powerlines! They’re everywhere, and not just the overhead wires, all the trappings associated with electricity are above ground, silhouetted against every skyline. They’re thick and black and many extend down into the pavement, often wrapped in bright yellow and black stripped casings.

Until seeing the lines here, I hadn’t realised how much of New Zealand’s electrical cabling is below ground or tucked away discreetly. As far as I’ve been able to work out, part of the reason is convenience. If everything is out in the open and easily accessible it saves time (and money) when repairs need to be made.

This also applies to household meters, such as those for gas. In the apartment I’m staying in, for example, the pipes just come up through the floor in the living area; the meter can be easily read. But I’ve also read that there are issues with their being so many wires above ground, both when it comes to safety (earthquakes are a risk further south, and heavy snow frequently brings lines down), and on the other side of the equation is the huge cost of converting them all to underground.

Even as I write this, I’m aware that I barely notice these wires any more. They are merely part and parcel of the scenery.

Next episode: Signs of Spring