I started this post over a month ago but recent circumstances got the better of me and I didn’t get it finished.  Today I’ve made the commitment to at least get something posted – after all, the whole point of a blog is keeping up with it.

We’ve had a little rain – just enough to prevent it being declared a drought in our area, unlike some other parts of NZ – but it’s getting very dry now.  As I write a large truck has come scuttling down the hill and along the gravel road beyond our gate.  Huge clouds of dust drift and settle on our property.

I think of the solar panels and how they will most likely need to be cleaned manually if we don’t get a decent rainfall soon. You’d be surprised how much dust settles up there! Or perhaps you wouldn’t.

As I write it’s around 1.30 pm and 27 C outside in the shade.  By the time the sun comes around it will get very hot where I’m sitting, even with all the windows open.  It’s much too warm and humid for me outside at this time of day.  The sun just bears down relentlessly – hence the garden is quite neglected.  I’m hanging out for cooler mornings and evenings now that it’s Autumn.

The garden has still been remarkably productive, considering that until last week (when I put in a row of broccoli and rocket) I hadn’t sowed anything new since December.  We are still producing enough vegetables not to have to purchase anything other than the occasional bag of potatoes.

The basket above shows some of the vegetables we’ve been harvesting since I last wrote, but the green beans are finished now.  As are the peas and we just didn’t eat any of the lettuces I diligently sowed in Spring and early Summer – they kept going to seed as we were eating other vegetables, so I stopped sowing them.

The vegetables we’ve been consuming the most of, lately, have been tomatoes, turnips and zucchinis.

The heirloom golden ball turnip is a delicious little vegetable and easy to prepare.

A simple recipe I use is to peel them, then cut them into cubes and blanch in boiling water. Drain the water off and saute the cubes in a little oil of your choice until they start to brown in patches, add 1 tbsp butter, 1 tsp brown sugar and 2 tsp apple cider vinegar.  Stir through to form a light glaze.  Season with salt and pepper and they are ready to eat.

The three varieties of tomato that I grew this year are ‘Black Krim’, ‘Mortgage Lifter’ and ‘Bloody Butcher’.  Of the three, I definitely prefer Black Krim and Mortgage Lifter.

While Bloody Butcher has a nice flavour, I much prefer the texture and size of the other two.   As a matter of interest, I collected one of each and cut them in half to show how different they are from each other, inside. (Hence,  the images above.)

We’ve had enough cucumbers to keep us going, but not too many, and of course the usual carrots, rocket, basil… silver beet, beetroot, that we usually have on an ongoing basis.

I’ve lifted our almost all the garlic (yes, I know, it’s very late in the season not to have completed this task) and all the Egyptian Walking Onions.  We had amazing crops of each of these.  The onions are great and we have strung them up to dry out, and the garlic bulbs are very fat this year.

We do have a large section of our garden devoted to main crop potatoes but I have a bad feeling about them.  We didn’t really realise how much water they require and should have been watering the plants as they developed.  We poked around beneath the soil of a couple of plants a few weeks back and they really had nothing much under there, just some tiny, tiny potatoes.

Oh well, there’s always next year, I guess.  At least we did have a decent amount of ‘earlies’ prior to Christmas.

Fruit-wise we’ve had a glut of Passion fruit and are making sure that we each consume several per day so that they don’t go to waste.  They are lovely big Passion fruit and are extremely juicy and flavoursome.  We still have pulp from last season that we froze a year ago as it was so precious (haha!).  I’m definitely not going to freeze any this year.

I did manage to process some of our plums in January. We had so many, all ready at the same time, so we halved and froze some for later, ate a great deal and used the rest for jam and plum wine.

The left-hand  image above shows this year’s batch of plum wine  directly after the first racking off.  Prior to that I’d fast-fermented the must on the skins for the first few days, to bring through a little of the red colour – the plums themselves are yellow-fleshed.

We also opened a bottle of our plum wine from 2010 – we tend to forget that we have bottles of fruit wine in our cellar. It was actually not bad! 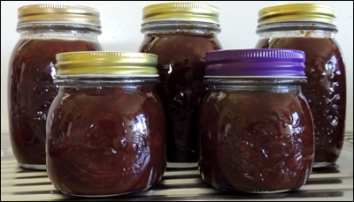 The jam was basically just plums, sugar and habanero pepper.  I had to keep tasting the jam as I went along to ensure it was hot enough (but not too hot!); I added more habanero as it cooked.  It turned out really well.

It’s very rich in flavour and ideal either just as jam, or added to casseroles or curries to give them an extra zing.  It’s also good with cold meats and cheeses.  Nice and spicy!  I love the taste of habanero.

Well, there’s a sad tale to tell about Molly (it has a happy ending, though).  I’ll have to write up what happened in a separate blog or I’ll never get this posted.

I’ll finish with a photo of a couple of my dahlias.  They are very pretty… this photo was taken a week or two ago, they don’t look so perky today, due to the lack of rain.